This is the 100th Anniversary of the creation of the National Park Service. What a wonderful bipartisan step that was to institutionalize a process for creating and maintaining national parks throughout the country. They are enjoyed each year by millions of domestic and international visitors. We have been emulated by nearly every other country on earth.

In my second book, Saving the Places we Love, I provide numerous stories on the END_OF_DOCUMENT_TOKEN_TO_BE_REPLACED

Berenty Preserve – A Gift to the Land of Lemurs 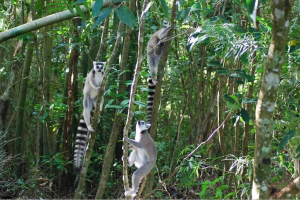 One Family’s Gift to the Land of Lemurs: Guest Post by Mary Klett and Mark  Southerland

Colonialism is often justifiably decried for its pillaging of natural and cultural resources; yet there are times when those who came to conquer, learn to appreciate and value these resources. Such was the case of Alain and Henry de Heaulme, who came to Madagascar, an island in the Indian Ocean off the east coast of Africa, in the early 1920s to build a sisal plantation for fiber production. They settled in the arid region of the Tandroy (people of the thorns) obtaining a French government “Concession” to exploit almost 15,000 acres of land beside the Mandrare River. Recognizing the uniqueness of the land, the de Heaulmes set aside 2,500 acres END_OF_DOCUMENT_TOKEN_TO_BE_REPLACED

Culebra is an 11.6 square mile island located off of the northeast coast of Puerto Rico. It is home to 1,900 residents, beautiful coral reefs and a robust tourist economy. It is a somewhat harrowing yet stunning plane ride from the main island to this priority coral reef protection area. My first visit to Culebra was with my family in 2013 where we had a great time touring the island in our Jerry’s Jeep (“It’s not a heap, it’s a Jerry’s Jeep!”) and snorkeling off of the white sand beaches. We collectively, quite simply, fell in love with Culebra.

My second trip to Culebra in 2014 was entirely different. I was contracted by END_OF_DOCUMENT_TOKEN_TO_BE_REPLACED