Pokemon GO is brilliant – Whatever it takes to get people outside.

I love the fact that I am seeing hundreds of people of all ages out on the paths during these hot days of summer. It took me a few minutes to appreciate what they were doing: they are all playing Pokémon GO “which allows you to find and catch more than a hundred virtual species of Pokémon as you explore your surroundings with your IPhone or Android device.”

I am still trying to understand why they are doing it. I did ask this question and received the following comments listed below. I think there is some real potential here for getting more people out of their basements and off of their couches to explore the real world while playing a virtual game. As you can see in some of the comments, these folks are starting to appreciate some of the paths and the special places that our ancestors have saved for us. Maybe a few of them will become stewards as well.

Kathy Smith It’s fun! It gets me outside, it allows me to talk with the people around me, and I’m learning a lot of trivia about the physical spaces around me (almost all of the pokestops where you can get virtual prizes are historical, artistic, or local landmarks). I’m really enjoying it. Yes, it’s a silly game, and yes, I’m a geek – but on the other hand, how many people play solitaire, or minesweeper, or any one of a hundred other games on their phones or tablets? But no one ever says anything about that … mostly because they’re sitting inside, alone. I’m enjoying this game that seems to be bringing people out and bringing people together.I’m highly enthusiastic about this game, Ned. I haven’t walked this much (regularly) since my walking partner up and moved to North Carolina.

Judy O’Keefe Kelsey says it helps learn the metric system and they are using it in PT to encourage kids to move. All good in my book as long as caution is used. I’m wondering if we’ll see this in the winter

Jen Cook I stopped to hunt Pokémon at a spot I’ve driven by all of my life. I’ve never seen egrets there before, just geese and ducks.

Chas Parr The week after it came out I accidentally walked more than six miles to Wilde Lake and back. I think it is a very positive influence despite the naysayers.

Ken Crandell I saw a ton of them roaming around Pismo Beach pier at night, too. Glued to their phone, but outside and walking, with some interaction with other actual real live people. So, it’s an encouraging development.

Sherry S. Wechsler While I am clueless about Pokemon Go, right after it was released my daughter Rebecca posted this: “Ok, I am not usually a big fan of apps and video games but am really a big fan of this new Pokemon Go. In the past few days We have walked over 10 kilometers, hiked Patapsaco Park, discovered a nature trail by our home, and walked our entire neighborhood multiple times. My kids have been outside nonstop and had a blast. We live in a digital world and if this gets people out and moving than I am all for it.” They have continued to explore. Of course, I did find myself in my typical Mom/Grandmother style cautioning her to make sure they all watch where they are walking and stay away from traffic, don’t focus on phone in parking lots, avoid cliffs, edges of swimming pools and watch for bicycles. 😊

Carol Weisman I still don’t understand the appeal of bellbottoms.

Take-a-way: I have been searching for ways to get younger generations outdoors. This game has done just that. It is now up to them to see what happens next. 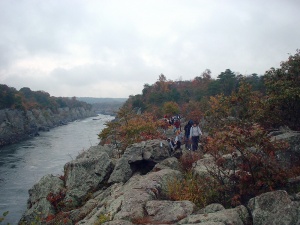 I have not done all the trails in Maryland but these are the memorable ones that I have done that are easy to locate. Many of the places I have hiked were along rivers or shorelines where there were no trails. Some of these required walking in the streams or in the shallow estuaries. It was all fun. But the ones listed here can all be found on maps and are END_OF_DOCUMENT_TOKEN_TO_BE_REPLACED